Well it wasn’t that scary after all for Halloween — except for all the trash the combined team of BMCAers, ARMNers and skateboarders [for Arlington Skatepark] pulled out of Powhatan Springs Park!! It was a beautiful day and we had a great turnout of folks from the three organizations. They planted new native plant species provided by the County to jump start the renewal of the park after all the industrial-scale ivy removal by the private contractors; picked up a good pile of sundry trash, some of which was of historical interest; and cleared ivy from various small and medium spots the contractors missed. Thanks to all that came out and joined in what was both a fun and restorative morning of work!
Next steps: We hope to return in the January-February period for another round of invasives and trash removal. It is really now the more the merrier. Before the contractors removed the majority of the ground cover ivy,  even a very large group of volunteers would have struggled to make a dent in it. Now there are lots of smallish to very small spots of ivy. Many eyes and hands looking for and pulling up the remaining small bits spread over the site would not be too strenuous yet would be very helpful for preventing the ivy from coming back. Similarly, with the ground cover still recovering, it is easier to spot the trash and haul it away. There are probably still some more archaeological finds back there!

Some friendly people with some scary stuff!! 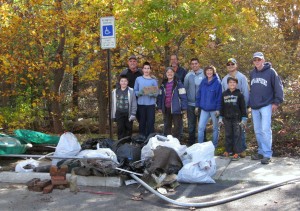 Some of the youngest found the oldest (click for history of pop and milk bottle – Perhaps used by the Reeves themselves?) 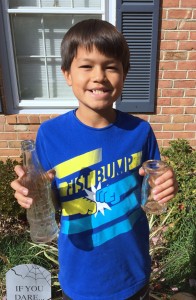 But some of the elders didn’t do too bad either on the historical front (a 1949 VA license plate – Perhaps from a Reeves farm truck?  We may end up with some items for the Reeves farm restoration project yet) 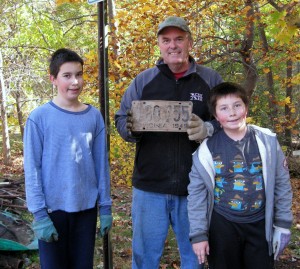 Planting new native plant seedlings.  Out of an acorn a mighty oak may grow! 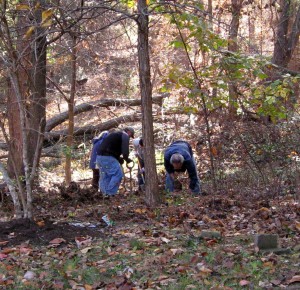 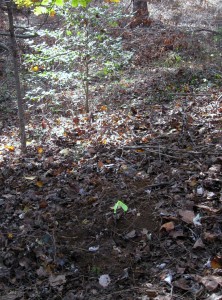 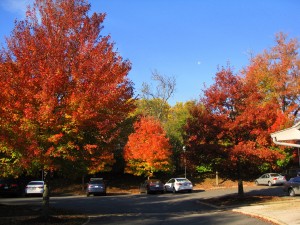